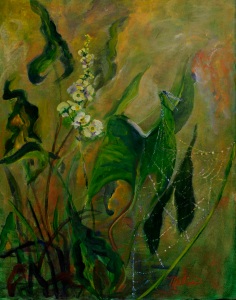 Yesterday I went to walk the boardwalk at Volo Bog, the last open-water bog in Illinois.  It is a very cool place, and has inspired a number of my paintings such as this one.  I love to gaze into the black pools of water that wends its way between mats of plant growth.  It looks so deep and mysterious.

Recently I’ve been reading, “33 Artists in 3 Acts” by Sarah Thornton.  It makes me uncomfortable, which is why I’m making myself read it.  I’m a little disappointed by the author.  She wants to know what artists are like, so she has chosen a handful from the ART WORLD.  Like the guy who bought a shark, stuck it in a tank, called it art and sold it for millions.  humph.  These are people who went to art school with the intention of making the connections that would vault them to fame and fortune.  They consider themselves to be art, and anything they create is incidental.  In fact they mostly don’t create anything, but delegate their ideas to craftsmen.  They are openly contemptuous of those of us out in the trenches, making our own art, striving to create beauty and perhaps share a message of hope and love.

I mention all of this because it takes me so by surprise and I don’t really know how to process it.  While I didn’t attend college for art (I have a BS in biology), I did look into it.  I had the impression that the point of attending art school was to learn how to make art. It never occurred to me that they were, in fact, grooming the next artist personalities, not the next artists.  So now we have a population of super-stars whose idea of art is dreaming up the obscene and making other people construct it.  Odd.  And the sad thing is, as you read what they have to say for themselves, you get the sense that they are lost.  They have been taught that they must participate in the conversation where it was when they came on the scene.  They must not paint, because painting is dead.  Had they all been born a few decades sooner, they would have been able to join the conversation at an earlier point. Say, before painting had been declared dead.  According to this line of thought, all painting that happens today is derivative.  Hmmm.

This isn’t the only area where I come across this.  Back in the early 80’s when I got involved with nature restoration, the field was wide open.  People were excited and hopeful and creative ideas were sought after, not squashed.  Nowadays, just try to suggest that another method of restraining exotics like buckthorn might work better than an escalation of herbicides and watch people blow their tops.

What do you think of this?  Is it valid to say that in any given endeavor, say art, or nature conservation, that there is such a thing as an ongoing conversation?  Are there a small group of “leaders” who get to decide what is right?  It seems rampant, to me. In so many areas of human thought and endeavor things gallop along into a blind alley.  Then, instead of pausing for reflection, the ones pushing for this line of thought harden it into dogma that must not be questioned.

Or is it necessary for the conversation to be interrupted from time to time…  I hope next time Sarah Thornton wants to know what an artist is she goes out and talks to painters and ceramicists and photographers and all of the other creative souls who call themselves artists.

visit me at www.melissabluefineart.com to see my original paintings available for sale. View more posts

Making the most of every new day!

On Art and Aesthetics

Plein air lanscape paintings from Santa Barbara and beyond...

Dedicated to the study, appreciation, and conservation of the native flora and natural communities of Illinois

A site for all positive thinkers to grow together!

return to the natives ... native plants are the answer.

I am beautiful princess.

A PERSPECTIVE ON LIVING WITH CHRONIC PAIN

I make photographs and poems to please myself (and share them to please you).

Tales, Thoughts + Tribulations of a Free Spirit in Suburbia

In My World
Lake Superior Spirit